The 1907 OS map of Oldham shows a Wallwork Street to the north west of the Market ground (see map below). This is the likely site of a place called WALLWORK FOLD. Some of our folk were born and married here, it's on the parish records. The area was most likely replaced with a street named after the smallholding or farmstead when villages and hamlets exploded into industrial sprawl.

The street of some 20 buildings was knocked down during the rebuilding of Oldham in the nineteen fifties.

The new street atlas for Greater Manchester printed by the AA has:

I would like to know why our name was honoured, how about you? Maybe in memory of the Wallwork fold, gone, but not forgotten.

The 1891 census has John Wallwork naggar maker living at No 4 Wallwork St Openshaw with Ann his Wife, and Lisa his niece (a spinner). He was then 48 years old and lived there until his death in 1915, he left a will.
Talking of wills, my great uncles' all left wills showing the houses they owned in King St, Princess St and Hope St Hurst. This summer I tried in the rain to take photos of some of them. The ones that still stand look in good condition and much loved. Great Uncle Handel would have been very well pleased.

The Wallworks made up less than 1% of the population in Lancashire (The 1881 census shows only eighteen hundred and ten Wallworks registered in the whole of England).
Going back in time to a smaller population, and therefore fewer Wallworks, I am encouraged that we have found so many names from quite a small community of Wallworks living and working in the southeast corner of Lancashire (called the Salford Hundred in medieval times).

For the archives I have made a location map showing most of the sites. Copies of Joseph and Marys' marriage bond 1818 also 5 wills of their sons, many births, deaths, marriages and christening certificates.
There are many gaps to fill, of course additions will be made as more information becomes available and mistakes can be rectified.

The way forward! or should I say backward? Is, I think, to look at the misspelling of our name and see if we can come up with some likely parents and dates for John Wallworth /Wallwork. 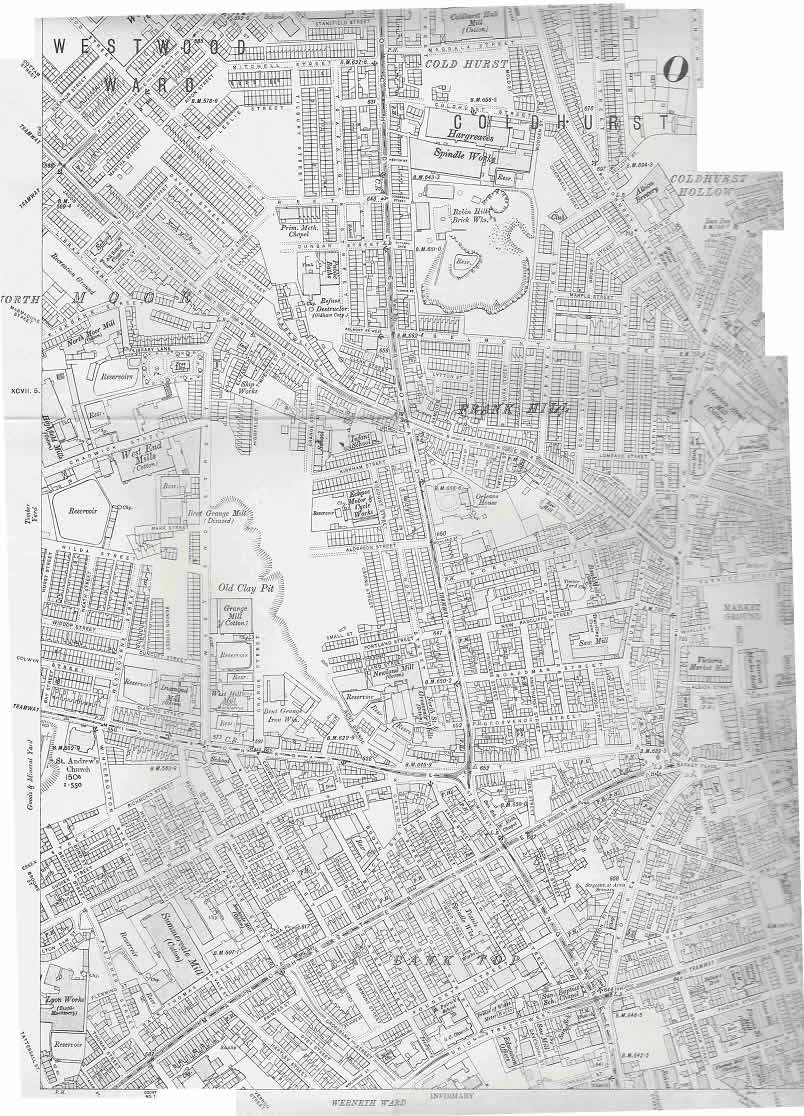 Firstly the surname Wallworth and Wallwork cross over from time to time in the early years.
It is difficult to be precise in the early period but every effort has been made to establish the actual turn of events based on the generally held view that John Wallwork (the elder) married twice.

JOHN WALLWORK (known as John the elder) born about 1705, his parents names and dates as yet unknown, married his first bride ELIZABETH WHITEHEAD on the 19th January 1730 at St. Mary Oldham as (JOHN WALLWORTH). Elizabeth Whitehead was baptised 11th November 1711 of Samuel and Alice Whitehead (nee Low) at Oldham. Elizabeth (now again Wallwork) was buried there 10th January 1747 aged 36, the value of her estate being under £10 to JOHN by administration.

No details as yet on the death of John but 1761 onwards.

The children of the above were all baptised at Oldham with the name of WALLWORK. They were as follows:

NOTE: To obtain the list of the above children it was necessary to input the baptism of John 1731, click on family and obtain the list of children. This cannot be found by the input of the marriage, this says children "None". All the children on the above list are verified by the "Oldham parish registers" as transcribed by Giles Shaw, 1889.

John Wallwork (was Wallworth) married Mrs Ruth Lees on 26th January 1748. This was the second marriage for both of them, they had both been widowed.

The children of the above were baptised at Oldham and are as follows:

So, from the nine children of the two marriages four died by the age of 24. Again the details are as the register, Giles Shaw 1889, with the exception of the death of James 1797.

There are conflicting details at this point. See IGI marriage of John Wallwork and Sarah Needham 27th May 1950 (clearly an error) should read 1750 (see children) the details of the children may have been added by a family member, they are listed as the probable family.

The children of the above were baptised at Oldham unless stated as otherwise and are as follows:

JAMES WALLWORK (OF JOHN AND SARAH)

The children of the above were baptised at St Mary Oldham and are as follows:

If anyone has any more information please could they let me know. If you are a Wallwork outside the UK, I would be especially interested in hearing from you.